Pneumonia is an inflammation or infection of the bronchioles and alveoli in the lungs that frequently occurs in infancy and children. Pneumonia is one of the causes of morbidity and mortality in children aged under five in developing countries. The incidence of pneumonia in the hospital TNIAD Padangsidimpuan City continued to increase from 2012-2015. The purpose of this study to analyze the relationship between age, gender, birth weight, history of breastfeeding, nutritional status, a history of vitamin A supplementation, immunization status DPT, the status of measles immunization, as well as a history of asthma and pneumonia in infants at the Hospital of the Indonesian National Army Army (TNI-AD) in 2016. This type of research is an analytic study case-control design. The population consists of a population of as many as 130 cases and control populations is the case all infants and mothers were diagnosed with pneumonia who were treated at the Hospital Inpatient Indonesian Army (TNI-AD) as many as 65 people .. The control population is all children under five and mothers which is not pneumonia who were treated at the Hospital road Indonesian Army (TNI-AD)) as many as 65 people. Data were collected through medical records and interviews using questionnaires. Data was analyzed by univariate and bivariate using Chi-Square test at the level of 95% (P <0.05). Results showed variable birth weight, history of breastfeeding, nutritional status, immunization history DPT, measles immunization history, and a history of asthma associated with the incidence of pneumonia in infants. The variables of age, sex, and history of vitamin A is not associated with the incidence of pneumonia. Advised To Hospitals Army City Padangsidimpuan to make efforts to overcome pneumonia based on risk factors, namely by increasing activities to educate people, especially for parents who have children on the fulfillment of optimal nutrition to improve the nutritional status of children, understanding of exclusive breastfeeding, provide information to the public about the importance of immunization in accordance with the immunization schedule 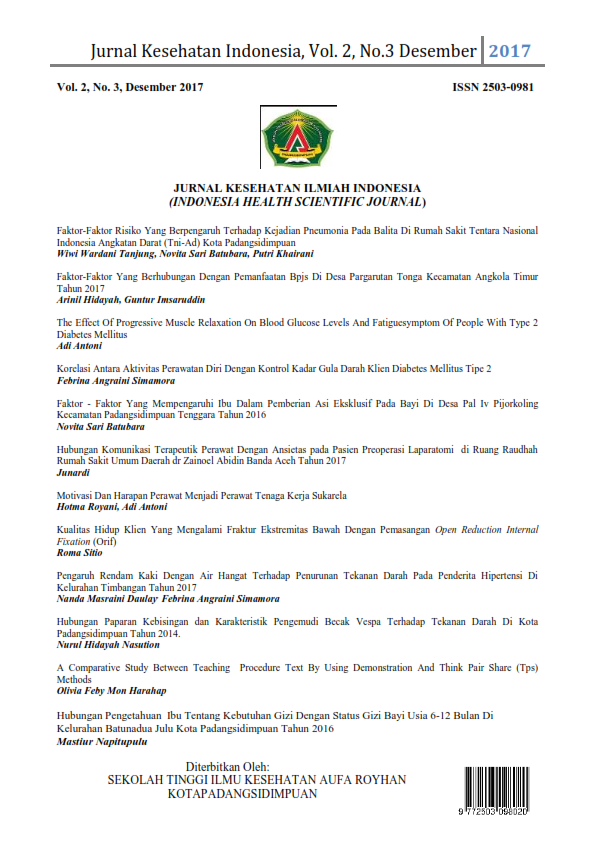