Contraception under the skin (AKBK) or a contraceptive implant is threaded under kulit.Kontrasepsi hormonal contraceptive use is a group in third place worldwide. Most (85%) used oral contraceptives, while the implant is only 15%. However, some countries may be more reliant on one particular method.
The purpose of this study was to determine the Factors Affecting the Use of Low Kb implants in women of fertile age Partihaman Saroha In the village of the DistrictPadangsidimpuanHutaimbaru2016. This study research design correlation with cross sectional method that aims to discover the relationship between different variables, to calculate the correlation we use statistics. Samples taken from the entirety of the object under study represent the whole population, the woman of fertile age Partihaman Saroha In the Village District of Padangsidimpuan Hutaimbaru2016.
The results showed that the majority of the 35 respondents knowledgeable enough total 25 persons (71.4%), and minorities are less knowledgeable of 5 people (14.3%), then P = 0.002 (α <0.05). Low socioeconomic majority totaling 27 people (77.1%), and high socioeconomic minorities amounted to 8 people (22.9%), then P = 0.002 (α <0.05). Social culture does not support the majority was 22 people (62.9%), and minority cultures bersosial support amounted to 13 (37.1%), then P = 0.000 (α <0.05). The majority of respondents Parity Scundipara numbered 21 people (60%), and a minority of respondents primiparous amounted to 7 people (20%), then P = 0.003 (α <0.05). So we can conclude there is the influence of knowledge, socio-economic, socio-cultural, and parity. Expected to Women of fertile age in order to follow the extension of health services and other health care workers and seek information about contra ception implant. 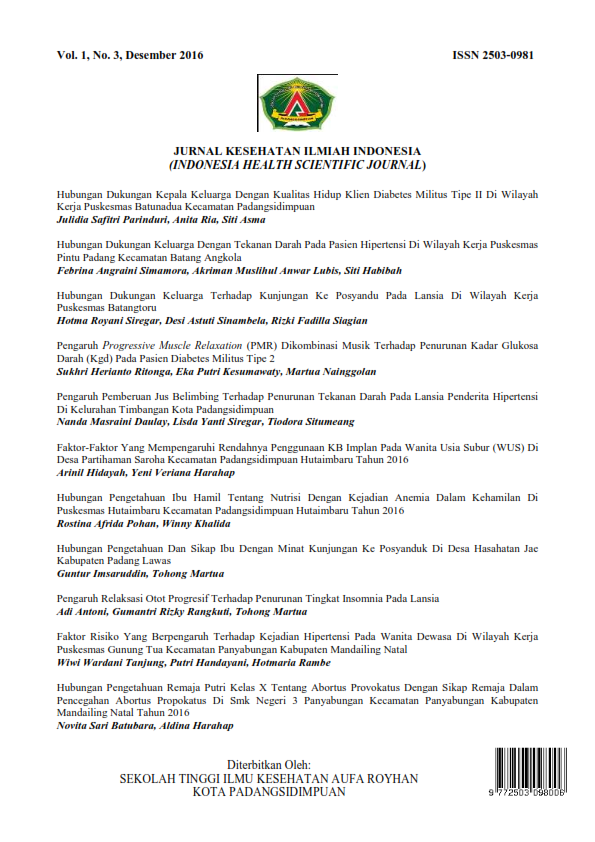